skip to main | skip to sidebar

The Living Language As Agent of Ascent by Steve Venright

A thirst for the infinite. A longing for the absolute. Lautreamont banging ou sentences on the keys of a piano, the eyes of Maldoror blazing in his head. Rimbaud and his sad ecstatic synaethesia; the poet as seer in the unchaining of the senses. Christopher Smart, again, and that virtuous multi-talented cat of his, Jeoffry, the angeltiger; the two of them channeling ontological thunder from a god much holier than the usual bearded sourpusses propped up on clouds by guilty Western romantics. Leonora Carrington in her hospital prison, down below everything in this world, below rape and war, below incarcerated love, reflecting Twentieth Century hell in shards of exploded-mind - a sorceress in the underworld who heals herself and emerges triumphant and beautiful alchemist. Baudelaire and his hospital prison where the soul cries to be "Anywhere! Just as long as it is out of the world!" John Uri Lloyd's alchemical hollow earth odyssey. Michael Dean's transcendent-textual gardens and lawns. The poignant Terra erotica of Nabokov as revealed in Ada. Joyce's ultramythic polyverse and its endless recorso. Dewdney's concordant proviso ascendant. Nichol's alphabetic hagiography. The transdimensional emancipation pirates of Burroughs. Coleridge's pleasure dome. Nerval's ivory tower. A lust for freedom and ascent.

From Spiral Agitator
Posted by Suzy Q at 10:10 AM No comments:

Here are a few words which may or may not be pertinent to the Historias. I imagine the following possibility:

One day, humans will discover that they are incapable of producing individuals or maintaining "undeveloped" societies with the gift of the particular temperament that is essential for the creation of myths and poetry. This sterility will be the result of the increase and acceleration of cerebral activity, as of the entire rhythm of human life. Of the "overpopulation" of natural knowledge via technology. Of the increasing all-encompassing interest in wealth and power at the expense of creativity. And - closely related, although inversely proportional to the above - of the near-disappearance of the external psychic environment and of the internal psychic personality; those that we heretofore called belief, imagination, humor, heart.

Nevertheless, these future humans will be well aware, by the epistemological studies they will have accomplished, of the cosmic role played by myth and archetypes for all creatures that have intelligence and consciousness of the absolute necessity of the existence of myths for the spiritual and physical health and survival of a conscious Species - for, as usual, when something has all but disappeared, it is only then, at the very last moment, and if we are lucky enough, that we realize its great value.

Until recently, the dominant belief was that the human communities-tribes developed separate "alphabets" of symbols and myths, depending on the conditions under which each one of them had come about. Now, however, new evidence shows that there are common sources of psychic symbols in the unconscious mind of all tribes and peoples. Thousands of myths taken from numerous cultures of the Earth reveal enormous, radical similarities; the archetypal symbols are thus the same for all. A pair of psychologists, Tiger and Fox, established the term "Biogrammar" to designate those common psychic archetypes which are deeply engraved in the spirits of all peoples and all eras of Humanity, unchanged from the primitive eras until now, irrespective of the language and linguistic structures of each people.

So, when people lose their power of myth-making, they will be forced to construct an electronic machine Poet, whose aim will be to undertake the transmission of ancient archetypes and symbols and their rearrangement for the creation of new Myths for humanity; and its name will certainly be Mythographer.

Yet when they do construct this machine, they will have to program it and then keep updating this program with new input. Many of the things they will teach the Mythographer we cannot know as yet. But, along with all the existing evidence concerning the raw materials of all tribes, ranging from myths, epics, beliefs, religions, fairy tales, stories, songs etc., and all the treatises written about them, there are certain recent "lessons" and instructions which are impossible not to include in the Mythographer before it starts its creative work.

On the work of Carl Jung on Archetypes, Symbols, and Dreams, and the work of Einstein and Heisenberg on the laws of relativity, probablity, uncertainty, and chance.

On the fact that the phenomenon called "the cause temporally precedes the effect" is valid only in statistical terms - as revealed by research in the inner microcosm of the atom, where everything is possible - and thus the relations between events, the very nature of time and space, may in several cases not be Causal. For example, a girl may have brown eyes because that will be the favourite color of the man she will meet when she grows up. Or, something may occur today that influenced one's behavious last week.

On the fact that the extent of a Probablity can never be verified. It is, by definition, a forever-unknown quantity, always in a state of uncertainty. Everything in the universe, from the inner world of the atom to the cosmological scale, time and space, the past, present, and future, morality, human relations, all things we know around us are constantly Relative. And...relatively constant.

On the fact that mythic events, by their very nature, often do not obey the various rules we impose on objective (?) reality or the rule of Cause and Effect.

On the fact that it is best to consider the universe as a psychic phenomenon.

On the fact that two or more opposite realities may be equally true.

On the fact that one plus one is not always two.

On the importance of Belief and its relation to knowledge.

On the importance and the activation elements of the Marvelous and the Enchanting.

On the intoxication of unknown pasts.

On the work of Dada and Surrealism.

Let us, however, allow the future to sleep. Many of these Historias Bizarros are closely related to all of the above (the hyper-three dimensions; the past-in-the-future or the future-in-the-past; the present mixed up in both; the machines; the dematerialization; the beyond of reason). Others have almost nothing to do with the Mythographer; they are but a mere facade, a tissue of images aiming at the reader's pleasure.

Yet they are all related to the influence of the "unprecedented" on the "everyday." They all live around a nucleus of para-time. We know them all, yet they are always elsewhere in time and space, like the phantom images which appear sometimes on TV screens. There is something very odd which is never localized, but which may not even exist. Like fairy tales told to children who believe everything they hear.
Posted by Suzy Q at 5:04 PM No comments: 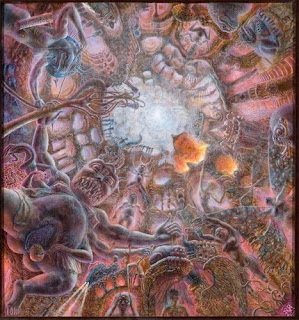 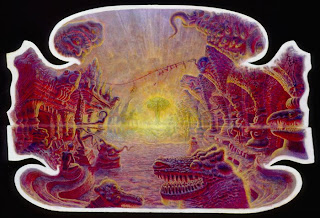 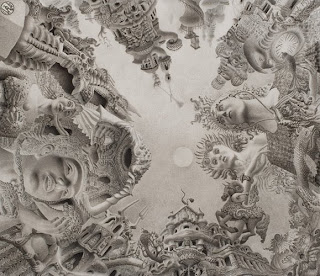 "In a dense phosphorescent fog, I have been searching for things which can never be found: the journals of Adam and Eve; a photographic record of the cities of the interior; a map charting the soul’s disasters and renewals; the keys to locked dimensions; the point at the centre of everything ..."

"My paintings are a residue of this effort. But they are only shells, fossil imprints around the things I truly meant to give existence to – those lost moments when my identity fell to the ground like a torn dress, and I moved through non-human spheres with X-ray vision and a compound mind, seeing and being all of those impossible things."

"To be honest, Jon, I don't actually have any spiritual beliefs… I think of beliefs as convictions about things that one has never directly perceived. For me this is, at best, a guessing game.

I have lots of "spiritual" experiences, though — if apocalyptic and heavenly visions; states of blissful beatitude; universal love and compassion; and the acute perception that creation is one, world without end… qualify as such. I've been tempted to draw conclusions and form beliefs from these experiences — the human mind naturally jumps to conclusions — but my path doesn't involve creating a system of beliefs (a religion). If I have any attitude towards the formulation of beliefs and religions, it is that I personally prefer to avoid all forms of religious crystallization.

In my art I'm recording parts of my journeys in the non-material worlds. Between 1999and 2004 I made pictures of apocalyptic/transcendent realms. More recently I've begun a transformational heaven/garden/love phase, with passages suggesting that wonderful experience, the acute perception that creation is all one, world without end."

There's anInterview with Maura here: at the beinArt Forums

There is a fine essay by her entitled Tsunami here at beinArt: Tsunami
Posted by Suzy Q at 12:56 PM No comments:

In The Eyes of the Gods
To Louis Aragon

A little before midnight down by the docks
If a disheveled woman follows you don't pay any
attention.
It's the azure. You don't have to be afraid of the azure.
There'll be a large blonde vase in a tree.
The bell towers of the town with blended colours
Will be your reference point. Take your time,
Remember. The brown geyser hurling fern shoots into the
sky.
Salutes you."
The letter sealed with a fish's three corners
Was now passing by in the light of the suburbs
Like an animal tamer's sign.
All the same,
The beautiful woman, the victim, the one known
In the neighbourhood as the little reseda pyramid
Unstitched just for herself a cloud like
A sachet of pity.
Later the white armour
Which used to take care of household and other chores
Taking it easy now more than ever.
The child with the seashell, the one supposed to be...
But shh.
A brazier was already baring
Its breast to a delightful cloak-
And-dagger story.
On the bridge, at the sometime.
Like so the cat headed dew rocked back and forth.
Night, - and their illusions would be lost.

Here are the white Fathers coming back from vespers
With the immense key hanging above them.
Here are the gray heralds; finally here's her letter
Or her lip: my heart is a cuckoo for God.

But by the time she speaks, nothing's left except a wall
Flapping inside a tomb like an unbleached sail.
Eternity searches for a wristwatch
A little before midnight down by the docks.
Posted by Suzy Q at 10:43 AM No comments:

Survival Unit - The Hall of Truth 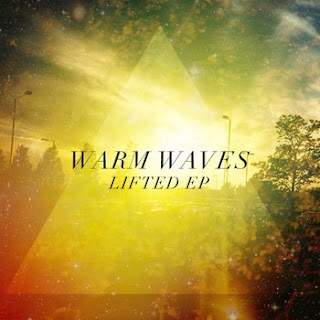 Some lovely lo-fi dream-pop you can hear or download for free right here
Posted by Suzy Q at 12:51 PM No comments: